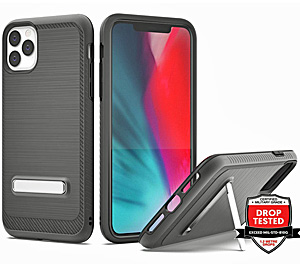 Over the past few years, we've seen a few major developments with the iPhone products. The back of the phones will look similar, with the Pro models having three cameras along with a LIDAR sensor for 3D scanning. The standard iPhone 12 models will have two cameras. The standard iPhone 12 models will continue to use aluminium housing, and the iPhone Pro models will stick with stainless-steel housing. Apple is known to not be first in line when it comes to adopting technology while it’s still in its shaky stages. And that’s where 5G is — limited coverage, unmanageable components required to support it, and so on.

All the new iPhones are expected to have 5G capability. 2020 will be the first year that Apple introduces 5G support in the iPhone, allowing the new devices to connect to 5G networks that are much faster than 4G LTE networks. According to rumours, all of the iPhones in the iPhone 12 lineup will feature 5G connectivity, though it's not yet clear if all iPhone 12 models will have super-fast mmWave speed support anyway. Other reports suggest that mmWave speeds could be limited to the Pro models in certain countries.

THE FEATURES OF IPHONE 12 SERIES

Well, for one, we expect to see the iPhone 12 series to have 5G. Also, a slight facelift is rumored to be in the works, as well as a grand total of 4 different iPhone 12 models.

Future iPhone cameras could adopt circuit boards based on liquid crystal polymer (LCP), which would allow them to transmit higher-resolution images at higher speeds. Higher transmission speeds are necessary to allow for high-resolution images in live streaming and AR applications in the 5G era. This could be implemented with the launch of the iPhone 12.

A future iPhone will include both Face ID and an under-display fingerprint sensor, according to a reporter. The technology will be introduced in October 2020, but may not be ready until 2021. Another information leaker, though, has said that the two lower-end iPhone 12 models will start at 64GB of storage while the higher-end models will start with 128GB of storage.

The iPhones coming in 2020 could have some small gains in battery capacity as Apple suppliers are working on a custom battery protection module already. That could free up valuable space in the iPhone. The iPhone 12 models coming in 2020 will use an Apple-designed 5-nanometer A14 chip. The A14 chip is expected to bring both speed and efficiency improvements that could bring small gains in battery life to compensate for 5G, which uses additional battery, therefore, tend to last very long so as to serve the customer well. It's not known if these battery capacities are accurate, but if they are, with processor improvements, battery life could be about the same as the prior-year models. 5G connectivity is a concern, however, so we will need to wait to see how battery life in the iPhone 12 series compares to iPhone 11 battery lives.

According to reporters, the iPhone 12 5G is speeding into the future. Usually, we expect to see the iPhone lineup announced in early- to mid-October. But the iPhone 12 series may be delayed due to the viral pandemic, which has spread across the world. Reports are coming in the numerous factories in China were forced to close or slow down production. This will definitely hit many technology companies, Apple included.

We are hearing mixed messages concerning the price of IPhone 12 series. It's possible that Apple hasn't really come to a final pricing strategy as well. The new 5G modems really do jack up prices and a lot of manufacturers are having trouble coming up with a good, balanced price point at the moment.

Reports say that we will see 5G iPhones in 2020 at the earliest and we've already heard crazy conflicting reports on how many different iPhone 12 variants to expect this year. First, some said there will be a total of 6 versions — most of which would just be 4G / 5G versions of  the same thing. Then, we got consistent reports that there will be 4 different iPhones too— two non-pros and two Pro models, with only the Pros supporting 5G. It looks like even Apple wasn't sure what angle to approach this current 5G phone at, since suppliers were reportedly waiting on news from Apple on whether they should round up production or not and that will let them know more about the price.

As per the latest leaks, all four iPhones (the 5.4", 6.1", 6.1" and 6.7" models) will have a 5G modem; however, there will be a 4G only variant of the smallest iPhone 12. Supposedly, that one would be more of an international model, meant to sell in countries where 5G is still not even close to being built. That would also make it a slightly cheaper iPhone 12, some have speculated.

Given how the global pandemic has affected phone production and possibly costs, it's not hard to believe that Apple wasn't in a hurry to accommodate a technology that hasn't even been widely adopted yet which makes it difficult to determine the price.

Conclusion: With Apple's much-rumored iPhone 12 expected to launch in the fall, now is the worst time to purchase a new iPhone. If you're already planning to spend hundreds of dollars on a new phone, it's probably worth it to wait for the newest model that's expected to come with 5G support and the latest Apple processor.